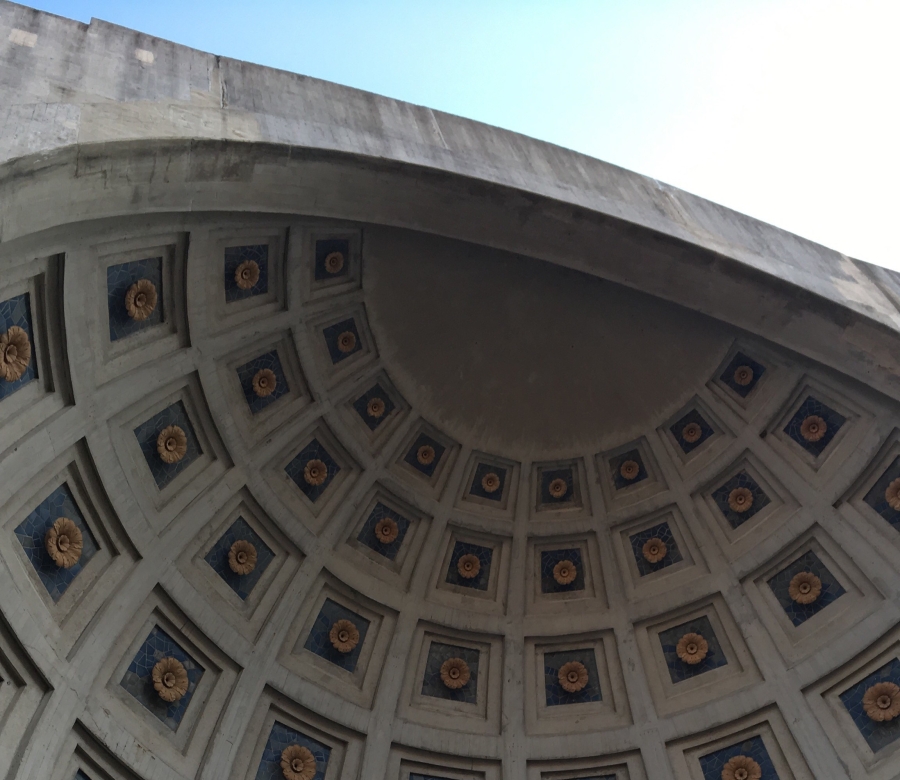 “Alright folks, it’s time to get out!”, an Ohio state trooper bellowed out to the few left in Ohio Stadium. Other than the Pride of Oklahoma, still scattered on the field after their postgame concert and stadium workers, i’m pretty sure my group of friends was the largest group left in the cavernous old stadium. We agreed; it was time to get wrecked on High Street. But in that time span from final whistle to The OU Chant, none of us wanted to leave. As we took one last glance, my travel buddy and Bar Review veteran Mike Bussow blew a mocking kiss and shouted out to the stadium “God bless the f*****g ‘Shoe!” 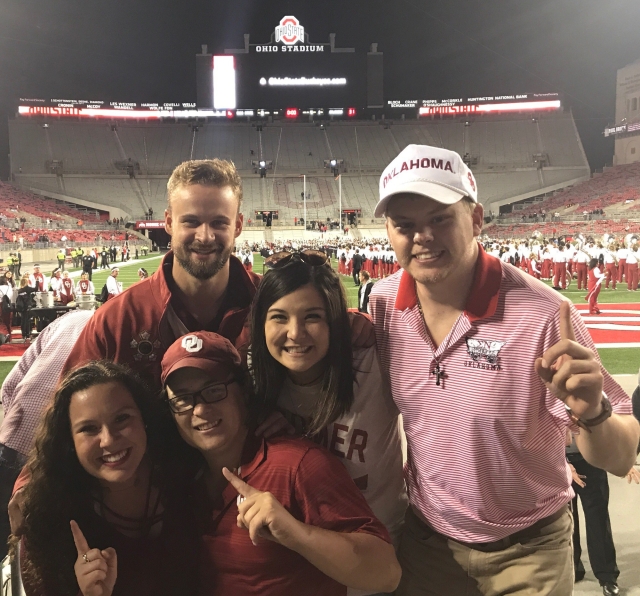 We had done it; Oklahoma beat Ohio State in Columbus, and we were apart of the lucky few to take part in a weekend for the ages. 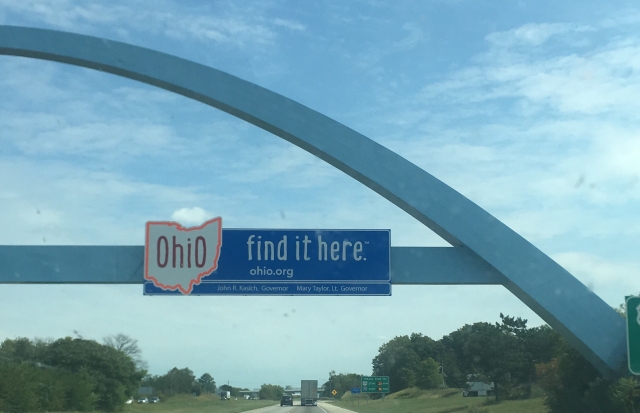 We rolled into town in the mid afternoon. It was a brutal drive; 14 hours through the dead of night in a 2013 Honda Pilot, the official automobile of The Schooner Blog. Most of the time was spent listening to Pardon My Take or Revisionist History, two podcasts that couldn’t be on more opposite spectrums.  The crew was me, my girlfriend Derielle Keiser (if you don’t know her, this is her name and not a typo. If you do, learn how to spell her name dammit), Bussow and Kyle DeFord, all people who have been on or will be on Bar Reviews. 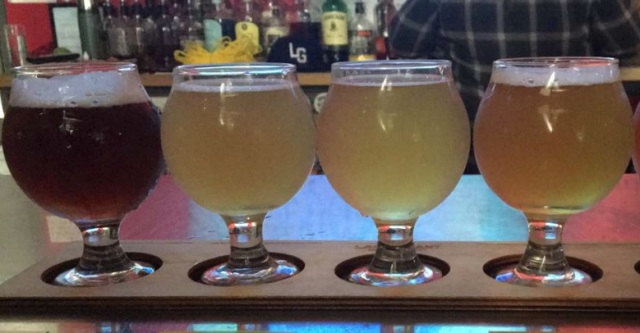 After dropping off Bussow and DeFord at their places, Derielle and I went straight to the place we desperately needed: The Land Grant Brewery. Both Columbus and the state of Ohio have great breweries, and this one was my personal favorite in Columbus. Land Grant wasn’t afraid to get weird (One of their beers tasted just like Gatorade; it was awesome), but also has solid offerings for everyone. They had a relaxing taproom, solid prices and a great range of beers. I recommend the Creamsikölsch, a Kölsch with vanilla and orange. It was one of the best and most unique beers i’ve ever had.

Once we left the brewery we hit up a Columbus treasure, Schmitt’s Sausage Haus. A friend of mine named Brandon Witte, noted 5th generation Sooner, invited us up to the top floor of Schmitt’s, which his Dad had rented out for a bit of a Sooner Alumni party. It was amazing; here we are, 1,000 miles away, surrounded by Sooners. Not only that, but the food was to die for. The bratwurst, the meatloaf, all of it was good. But it all paled in comparison to this red sausage known as the Bahama Mama. Seriously the best sausage i’ve ever had. If you closed your eyes, your brain would have told you that you were in Europe.

After that, we hit the bars across from Ohio State on High Street. Almost immediately you could tell this bar scene is far different from Norman. There are a ton of bars, and all of them were packed. I mean, Logie’s, Saturday night, line all the way to Tea Cafe packed. And why wouldn’t they be? Ohio State’s undergrad enrollment is over twice that of Oklahoma’s. It showed.

We made our way into one of the big 3 bars on High Street, Ethel and Tank and reunited with Bussow. It was a solid bar with good deals if you could find them. My go-to drink here was easily the 3 dollar Landshark Lager tallboys. Don’t try to go for anything other than wells unless you are down for paying 11 bucks for a Crown and Coke. Overall, not a bad bar, got pretty drunk and ended up at Waffle House. Not a bad first night.

We woke up the next morning in time to catch Corso picking Ohio State on Gameday and went straight to Hounddog’s Pizza. Derielle’s next door neighbor got engaged here, so how could I say no? This place had wild options including fries on the pizza and hot sauce as the sauce. We stayed conservative and had a normal meat lovers, washed down with an ice cold Yuengling. 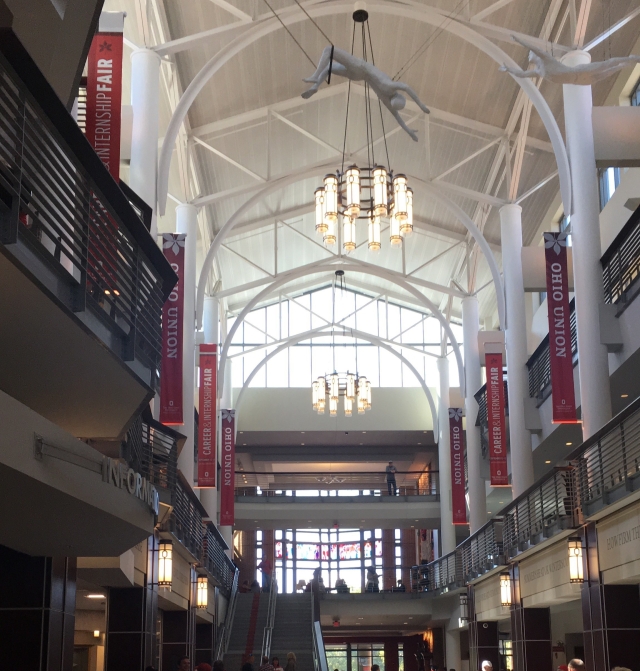 Some of our friends started pregaming started at 2, so we filled up our flask with shitty apple whiskey and headed back to good ol’ High Street. There we met up with Slater and Michelle, two good friends who drove up separately, but made it in too late for bars. They were at Ohio State’s jaw-dropping student union, one of the most impressive campus buildings i’ve ever seen. We didn’t stay long, as booze >>>> architecture. We went across the street to The Big Bar, which had a pretty expansive rooftop bar. The beer system was down, but they had reasonably good well prices so it didn’t matter much.

Slater and Michelle had to go back to their hotel to drop off Michelle’s purse as it wouldn’t fit Ohio Stadium guidelines (shoulda read the article), so Derielle and I hopped onto the next bar.

The next bar, Trism, was easily one of the strangest things i’ve ever seen; it’s a juice bar by day, and a night club thing by night. There was an enormous video board style TV playing the Iowa State game. It hadn’t looked like it had caught on yet, but DAMN were these solid deals. $3 wells and $2 Bud Lights were the perfect move to get properly hyped for gameday. 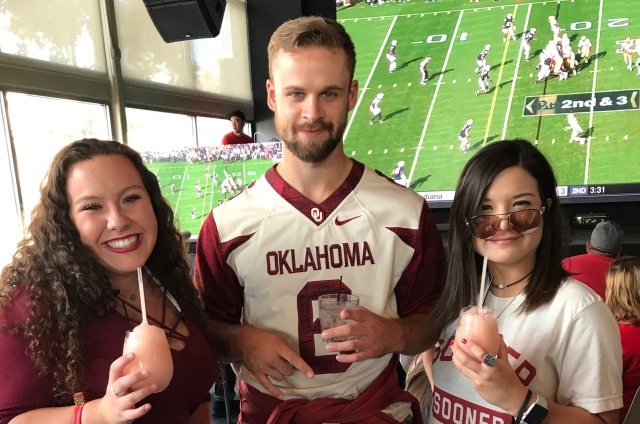 We stayed here a few hours, met up with Slater, Michelle and Bussow again, accidentally stayed some more and the ladies got frośe’s courtesy of Drunk Bussow. Finally, we made the trek to Ohio Stadium, properly fired up. We finished the flask on the walk for good measure. 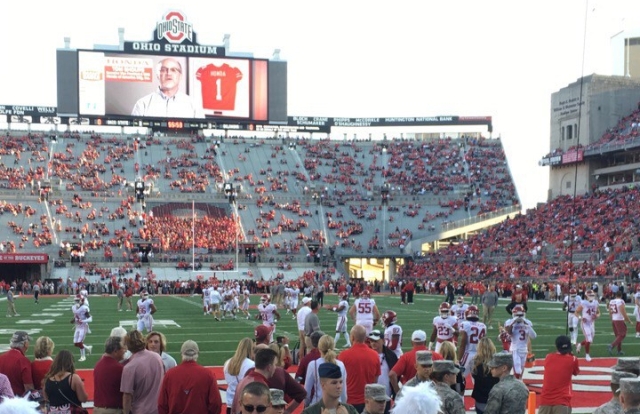 The first glance inside Ohio Stadium is the perfect blend of intimidating and awe inspiring. We were blessed by the OU athletic department with absolute fire seats. The stadium is old as hell, but like Owen Field you can tell it’s an incredibly meaningful venue.

The Ohio State band is legendary for it’s pregame performance, and for good reason. Script Ohio in Columbus lived up to every bit of the hype. But the biggest and strangest surprise? Ohio State invited our band to perform the traditional pregame. That only happens at bowls and OU-Texas, so it was a real treat.

The student section atmosphere was wild. Home student sections never seem to have the same energy as road ones. When you get the diehards all together on the road, we band together and get loud. You lose the casuals that are just there for drinking and add those who are there for both occasions. It was a damn mosh pit after Parnell Motley’s interception. Someone almost got ejected for beer showers! I’d go nuts if every home game was like this.

As the game wrapped up and OU secured the win, it was all kinda hitting me at once. We really beat these guys. I think I mentally blacked out for most of the postgame celebration. The team ran up into the section with the traditional “Weeeee tooooooo deep, OU!” chant and we moshed again. Then, the damn flag plant. Easily the most badass thing i’ve seen live. The game was won, and every mile and minute was worth it.

Afterwards, we did what any sensible person who witnessed their team beat #2 badly would do and went straight to the bars. And, shocker, it was way more packed than the night before. The cops were shutting down lines, it was wild. It became rapidly apparent that I wasn’t getting an overall bar portfolio this trip. So went went right the hell back to Trism, our old haunt from earlier. Which STILL had $3 wells! The rest of the night consisted of double fisting wells, celebrating with other Sooner fans and partying on elevated surfaces. I’m pretty sure a random DJ set happened, but I can’t confirm. 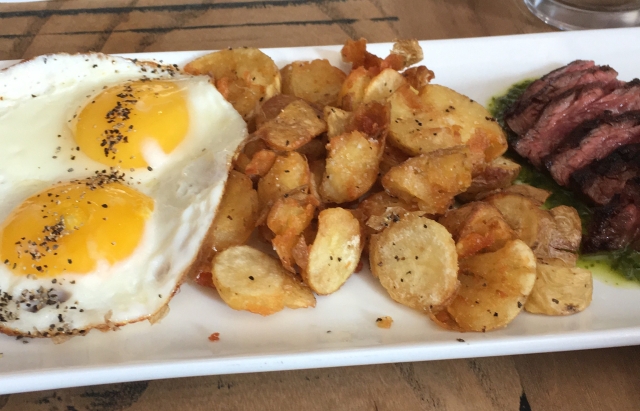 The next morning, we drug ourselves out of bed, picked up Bussow and DeFord, grabbed some breakfast and headed out on the long journey back, with a full season and limitless possibilities ahead.