Here we are, the part of the season we’ve all been waiting for: Red November. The Big 12 schedulers love to put all the big OU matchups at the end of the season (other than juggernaut, Iowa State) so that typically results in at least three legit games and one random cupcake (sup Kansas).

This year? We start with an early Bedlam in Stillwater.

Who are the Cowboys?

To the rest of the world, Oklahoma State is a threat. For past ten years, the Pokes have been an offensive juggernaut, rolling over defenses as if they didn’t exist. Stillwater has seen the rise of what many consider as the Oregon of the Southern Plains, a true contender in not only the Big 12 picture, but the national one as one of the best teams in the nation annually.

To us in Norman? They are still little brother. Despite all their success, the golden era Cowboys have only two wins over the Sooners. To many Cowboys, the inability to beat OU sticks in their side like a knife. Trust me, it shows. There are few games with as much vitriol as Bedlam in Stillwater (the Norman brand is more tame, the hatred is rather one-sided).

While OU fans generally dismiss their northern neighbors, the prospect of an Oklahoma State victory in football is worse than losing to Texas. See, with a loss to Texas, you hear gloating for a bit, sometimes it extends past a year.

With OSU, the most recent loss never dies. I still hear “Kick it again, Bob!” three years after the infamous Tyreek Hill return.

It makes sense for OSU to hold on dearly to their wins; they only have 18 in 111 years of playing the game. But honestly, they take any chance necessary to try to make themselves look good.

The most egregious act of little-brotherness was their claiming of the 1945 National Title, which was a year that is unanimously considered to be won by Army, one of the best college football teams of all time. Army’s claim as the best in college football is almost so ironclad that Alabama, who claims any title they possibly can claim, refuses to acknowledge their undefeated 1945 Tide as National Champs.

On top of that, they are just so damned easy to make fun of. They legit rolled out this song for use in a hype video and named it “Cowboys4Ever”.

Yeah, that might be the worst thing ever. It sounds like a scrapped theme for The Teletubbies. With that being said, I’m not sure what cracks me up more, the “oooooooooh ooooooooh” at the start, or that god awful “the prairie wind touches our skin” line. I think the fact they spelled it as 4ever take the cake on this one. Sure, this was like 9 years old, but honestly nothing sums these guys up more than this song.

I could honestly go on forever about how bad Oklahoma State sucks. I could easily go on rants about the trip attempt in 2013, the turkey leg waving gif, or the fact their mascot looks like someone that would horrify both children and parents.

But honestly, it’s just too easy to beat up on your little brother. 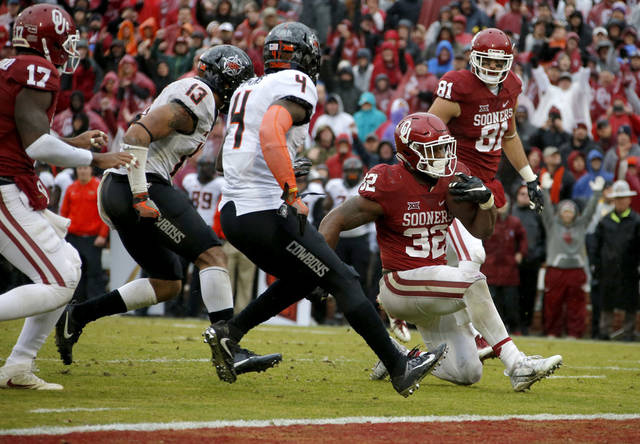 For the second year, it was Bedlam for the Big 12 championship and for the second year OU came out on top. The first half was pretty competitive, especially after Dede Westbrook got knocked out of the game with a concussion.

Tied at 17 going into halftime, the Sooners came out on fire, outscoring the Cowboys 18-3 to finish the game behind huge games from Baker Mayfield and Samaje Perine. The score should have been 45-20, if not for Perine taking the mercy knee on the one-yard line. Easily the most savage move in Bedlam history.

I’ll give the Pokes this; the stadium is awesome. They patched the place up since my first visit in 2002 when you felt the stands would collapse at any time. It’s not a big stadium, but it can get loud with Gallager-Iba Arena bouncing sound back at you.

The visiting sections are these slivers at the East ends of the horseshoe. Oklahoma State purposefully doesn’t sell Bedlam tickets outside of Season Tickets and the Visiting Allotment sent to OU, so unless you know someone, you are hitting the resale market.

If you are in Norman on Friday, ticket pickup is from 9-5 at the OU ticket office. On Gameday, OU’s will call will be located at gate N7 at Boone Pickens Stadium.

The bag policy is a solid 12x12x12 so no need to worry about this stadium, ladies.

Gameday is coming to Stillwater, likely eliminating any chance of Norman getting it. So if you want to do a proper Gameday, this one might be your only chance. The traditional setup in Stillwater is usually in front of the Edmon Low Library and I anticipate it will probably still be there. Plan on getting to Gameday around 6-7 AM.

(Good luck dealing with the Poke fans, i’ll be resting up for the bars that night.)

I’m going to get this out of the way first. Don’t be a rookie and attempt to go to Eskimo Joe’s on Saturday. It’s going to be a damn madhouse. However, apparently they have outdoor vendors around Stillwater if you want some of those sweet, sweet, cheese-fries.

If you are looking for other pregame spots, The Strip is a solid collection of bars and restaurants that have some solid deals to get drunk off of. The tailgate scene is not too bad either, but make sure to be prepared if you think you can mooch off fraternity tailgate beers. The university has a strict Greek Life alcohol policy that scares houses away from providing the alcohol, so be prepared to BYOB if you are stopping by any tailgates.

Bedlam in Stillwater gets heated like nothing else. Always make sure you have backup for the worst case scenario.