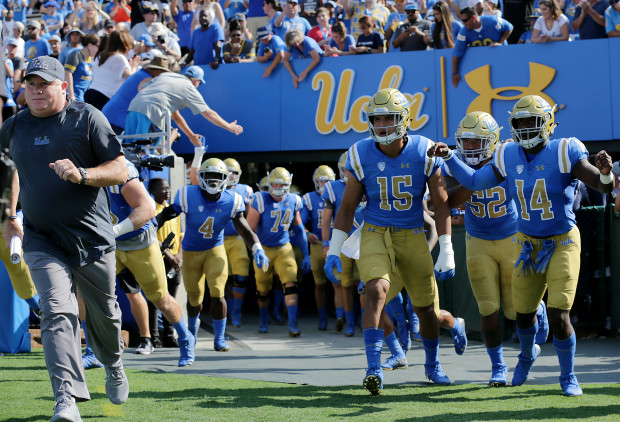 After a 63-14 romp over FAU, the Sooners welcome the UCLA Bruins in a game that could get just as bad as last Saturday.

Oklahoma looked as good as possible in week one, while UCLA….didn’t. The Bruins bombed in their first game under head coach Chip Kelly, losing at home to a mediocre Cincinnati team 26-17.

UCLA might have brand recognition and some clout as they are a Pac 12 team, but they are really not a great football team. There are a lot of unproven young players on this team.

Rodney Anderson and Trey Sermon better be ready for a track meet, as UCLA has an atrocious run defense, giving up an average of 287 yards per game last season. The Bruins somehow gave up nearly 200 yards to the middling Bearcat running back corp, who was without their top rusher.

The Bruins are very young, as they played 11 true freshman last Saturday. This UCLA team needs to grow up fast if they intend to compete with this OU team. 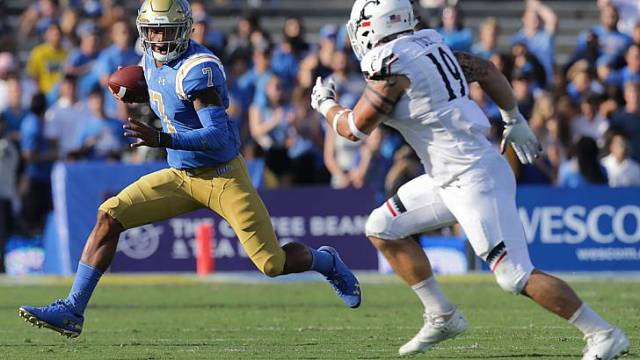 The quarterback position is a bit up in the air for UCLA as the status of week 1 starter Wilton Speight is up in the air after he left the game with an apparent back injury. The Michigan transfer has a history with back issues, as a cracked vertebrae ended Saturday,  his season in 2017.

If Speight is not ready to go Saturday, true freshman Dorian Thompson-Robinson will be the starter. A four star quarterback, Thompson-Robinson provides decent duel threat ability. He had an okay game against Cincinnati, throwing 15for 25 with 117 yards but was sacked four times.

Either quarterback shouldn’t worry you, but it’s a big question going into week 2.

This should be a bit of a closer game than last week’s match against FAU. While UCLA is still rebuilding and not exactly a great team, you need to respect any Power 5 team that comes your way (Kansas doesn’t count). Chip Kelly has a tall task ahead of him when it comes to building this program up and has some degree of craftiness in his coaching strategy. They were flat out embarrassed last week and should come out firing.

OU should handle UCLA easily. This is a special football team and to see them flex on a team with the brand like UCLA is pretty exciting.

Since the Bob Stoops era began in 1999, Oklahoma has always put a high level of importance in scheduling big home and home series. One of the early matchups was a 2003-05 home and home with UCLA. The Bruins return to Norman may seem to be a little soon, but is the result of LSU putting a scheduled 2018-2019 home and home with the Sooners on hold. UCLA just happened to have two spots available.

The two teams don’t have a ton of history with each other, as this will be just the fifth matchup between the two schools. The most notable game for Sooner fans has the be the 2003 game in Norman where Antonio Perkins put on a show for the ages. Perkins returned an NCAA record FOUR punts for touchdowns in a display that had to be maddening for UCLA fans.

The most recent matchup came in the massively disappointing 2005 season, where UCLA and Maurice Jones-Drew throttled the Rhett Bomar era Sooners 41-24. The game marked the moment that everyone clearly knew that the golden age of the early 2000’s was over.

The biggest link between the two programs lies in former OU and UCLA quarterback Troy Aikman. The Dallas Cowboy legend got his start in 1984, becoming the first true freshman to start at quarterback for the Sooners since World War II. In his first full season in Norman in 1985, Aikman got off to a 4-0 start before succumbing to a broken ankle in a loss to the Miami Hurricanes. Aikman’s backup, Jamelle Holieway would end up leading the Sooners to an undefeated record the rest of the way, including a win in the Orange Bowl that would net OU its sixth national championship.

It was obvious that Aikman wasn’t a fit at Oklahoma; he never looked comfortable in the  Barry Switzer’s wishbone offense. Not only had Holieway had just become an OU legend, he was clearly the better fit for the direction the Sooners wanted to go offensively. Aikman would announce his transfer to UCLA the following spring.

After sitting out the 1986 season due to transfer rules (UCLA played at Oklahoma that season, weirdly enough), Aikman took the reigns of the Bruin offense in 1987. Aikman thrived in the passing focused UCLA offense, going 20-4 in his two seasons, capturing the Davey O’Brian award for best quarterback in his senior season.

One thought on “Game Week: UCLA”