Somehow, despite all the mess of the past fews months of Oklahoma basketball, here we are: somehow in the tournament, somehow in a winnable game.

The question of whether or not this season was a relative success can wait. We still have basketball to play. First up, the Ole Miss Rebels.

State of the Sooners

Here’s the good news for Oklahoma: Ole Miss isn’t in the Big 12. The past few months of the relentless spin cycle that is the Big 12 basketball regular season haven’t been kind to OU as they went a putrid 7-11 in conference play. Luckily for them, their rock solid non-conference success against the other power conferences was great enough to carry them into the Big Dance.

The bad news? This still isn’t a great basketball team.

The late Fall version of Oklahoma scored by committee, with new stars like transfer guards Aaron Calixte and Miles Reynolds providing solid offensive point guard play. Christian James finally looked to blossom into the lead man we always thought he could be. Brady Manek appeared to make the next leap. This seriously looked like a sneaky good squad that could make a sweet 16.

Now? They mostly rely on Christian Doolittle to squeeze whatever offense he can out of a team that can rarely buy a bucket. James, Manek and the transfers fell off the face the planet and our only real big man Jamuni McNeece is just now getting healthy enough to play. It’s a complete mess.

But that’s apart of the beauty of the tournament, you get a fresh start. If the Sooners of November/December are still lurking deep down there, they better come out by Friday or it’s officially Spring Football season. 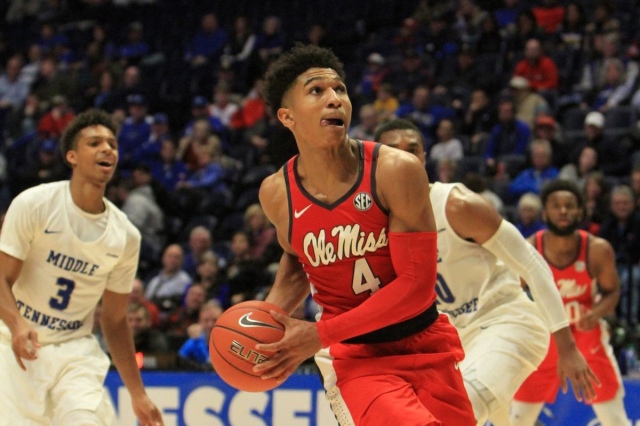 The non-running Rebels! Yes, to add to Oklahoma’s stakes we have ourselves a tilt against a SEC foe, which even in basketball just means more. While you might be familiar with the Rebels on the gridiron for having a tradition of dressing like a Southern Tide catalogue, occasionally beating Alabama (miss u, Chad Kelly) and having wildly erratic head coaches (BRING BACK NUTT), Ole Miss has negative basketball pedigree. They only have two tournament wins and they are most known for losing to Valparaiso on an all time great buzzer beater.

This team isn’t just bad in the history books however. They have been in a pure free fall towards the end of the season, going 2-5 in their final seven games. Somehow, the committee picked the one team colder than us when it matters.

The Rebels are lead by two upperclassman guards: leading scorer Breein Tyree (known for matching on Tinder with a Florida girl who then spread the screenshots around campus) and Terence Davis, who is missing an “r” in his first name.

Editor’s Note: Ty doesn’t know anything about basketball. But after years of living in Mississippi, he knows the Rebels. These are his thoughts.

Hello Schooner Bloggies™️, it’s ya boy Ty. Bobby asked me to whip up a few words on Ole Miss. Ole Miss is one of the only things about March Madness that I can speak intelligently to, so let’s take a quick look at OU’s first round matchup. The University of Mississippi at Oxford (Ole Miss) was established in 1848 so that young southern boys had a place to go and drink. Today, the Ole Miss “graduates”, or basically anyone I guess, face an annual endowment literally over a billion USD less than OU’s, so we will need to refer to them as “the broke boys”.

You may be wondering why wouldn’t we call them by their real team name. The reason we can’t call them a team name is because I have no clue what they are calling themselves this week. The broke boys used to be called the Rebels, which was offensive for obvious reasons and have ditched this moniker. They have recently gone by Black Bears and Land Sharks because those names are “cool” (All hail the one true mascot Admiral Akbar™️).

Other than being improvised, Ole Miss is known for STRONG links to the confederacy. Ole Miss is home to a very controversial confederate statue, but don’t worry, the university has a “great” explanation:

“It must also remind us that the defeat of the Confederacy actually meant freedom for millions of people.”

Now while technically true, this is probably the WORST justification I’ve ever heard. I’m sure that their history department believes that Hitler turned out to be a good guy, because in the end he killed Hitler, again technically true, but not that accurate.

Ole Miss is known to be a wonderful party school, mostly because the town of Oxford has a population of 20k and the nearest human civilization is Memphis which is over an hour away. It is a rich human tradition to just get drunk if there’s nothing else to do and the broke boys do this on a professional level. One of the most legendary college “definitely not fraternity house” parties occurs at Óle Miss each year at Sigma Nu Woodstock. It is a decent time as a sober HS kid, so I must assume that it’s also at least decent as a drunk college student.

I know that I touched on academics earlier when I mentioned their laughable endowment of under a billion dollars, but let’s take a look at the one true academic indicator: Astronaut Alumni. Òle Miss has zero Astronaut Alumni. LOL weak sauce.

Ok, final parting advice. When OU stomps the broke boys this week, look forward to whatever Ole Miss fans can afford to go to the game (probably not that many) throwing clothes, trash, and drinks on the court in protest. Even their coach is known to catch a T for throwing jackets onto the court. BMFS, beat the Broke Bois.

Everyone who is calling this a favorable draw for the Sooners is absolutely right. OU is frequently beat up inside and Ole Miss seems to have less than an interior presence than we do as their leading rebounder is guard Terence “one r” Davis. While the Sooners have been burned before by guards taking over (Tyree is the early leader in the clubhouse), this is a much easier thing for Oklahoma to combat compared to a skilled big man.

This game will come down to three big points:

Oklahoma should win this game and despite being fully aware that I have been constantly let down by this team, I believe they gut out a gritty win here to move on and face #16 Gardner-Webb. Oklahoma, +1